Two Christmases ago, our family flew back East to the Big Apple to spend the holiday with my beloved Auntie Rboo.  Her friend Hetty arrived for a Christmas feast with this pâté and in the blink of an eye it was gone.  Naturally, we HAD to have the recipe.

Fast forward two years and we finally decided it was time to recreate this cholesterol laden magic.  It turns out that the recipe came from Epicurious and was not a family secret as the flavour had suggested.  The Epicurious recipe creates far too much pâté for our household to eat, so I have reduced the recipe by 2/3.  Comments on the website suggest that if you make the full shebang, it freezes well (either before or after cooking).  Another tempting suggestion was to include chopped pistachios.

In any case, we ate this on crusty white bread with cornichons as an appy on Christmas day and again as fried slices with farm fresh eggs for breakfast.  Both were a treat and I have no doubt you will enjoy this immensely no matter how you serve it!

Set rack at lowest position in oven and preheat to 350°F. Boil Cognac until reduced to about 2 tablespoons. Cool.

Melt butter in heavy medium skillet over medium heat. Add onion and sauté until soft and translucent but not brown, about 8 minutes.
Combine ground pork and chopped bacon in large bowl. Using hands, mix together until well blended.

Add sautéed onion, garlic, salt, thyme, allspice, and pepper to bowl with pork mixture and stir until incorporated. Add egg, cream, and reduced Cognac. Stir until well blended.
Line 8x4x2.5-inch metal loaf pan with bacon slices, arranging slices across width of pan and lastly halved slices on each short side of pan and overlapping pan on all sides. Using hands, lightly and evenly press half of meat mixture  onto bottom of pan atop bacon slices. Place ham over in single layer. Top with remaining meat mixture.
Fold the standing ends of the bacon slices over. Cover pan tightly with foil. Place pan in a larger baking pan or roast pan and transfer to oven. Pour boiling water into larger pan to come halfway up sides of loaf pan creating a water bath. Bake pâté until a thermometer inserted through foil into center registers 155°F, about 2 hours minutes.

Remove loaf pan from baking pan and transfer to rimmed baking sheet. Place another loaf pan on top with some heavy cans inside to weigh down pâté.  Chill overnight.  Can be made about 4 days ahead.

To serve, place loaf pan with pâté in larger pan of hot water for about 3 minutes. Invert pâté onto platter; discard fat from platter and wipe clean. Cut pâté crosswise into slices.  Slices can be fried in a bit of butter if you are serving them with eggs for breakfast.

The first time I made kibbeh bil saniyeh for one of my best friends, he told me it was only missing “beet sauce”.  Try as I might, I had no idea what this mysterious sauce was called or how to make it.  I decided to try a recipe I found online for a beetroot mutabal which I adapted only by adding more lemon juice.  I am relieved to say that I have since been told it is exactly what my kibbeh was missing.  It is also the most excitingly coloured condiment I have ever produced! 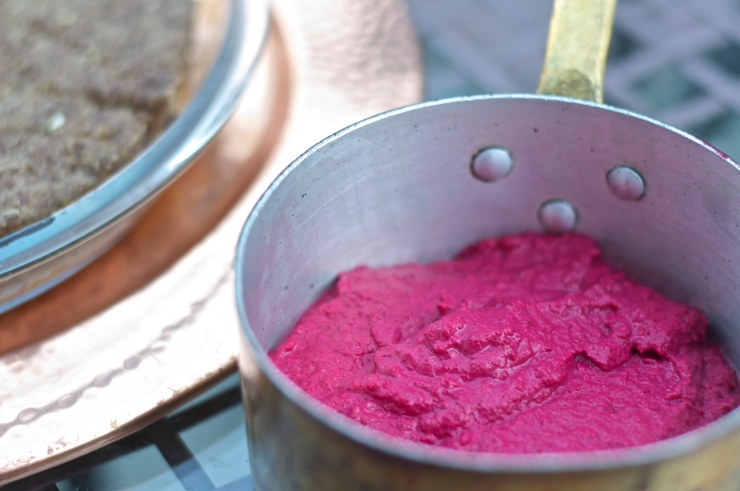 Blend the beets, tahini, and yogurt in a food processor.  Add the lemon juice and salt to taste. 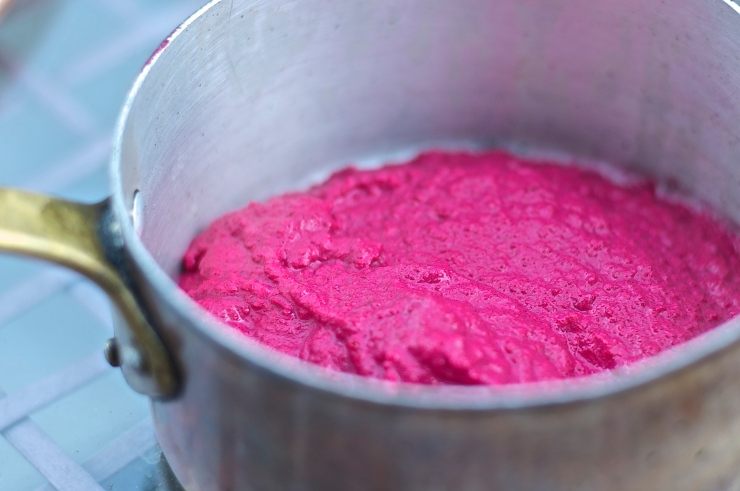 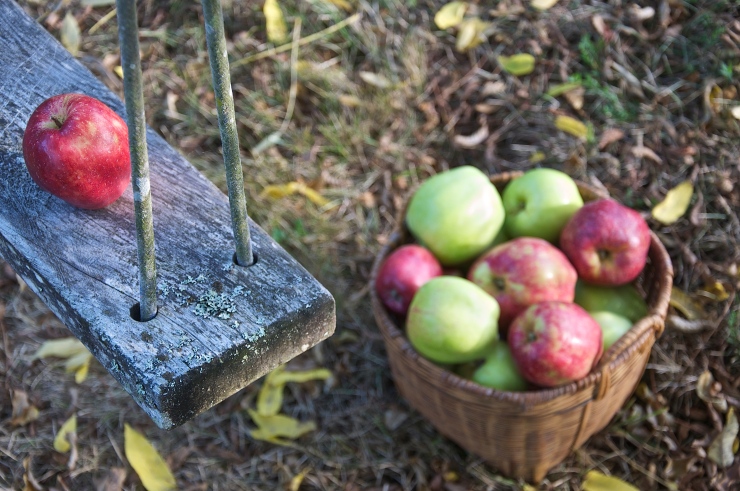 My parents live on a property that has the remnants of an old orchard.  The apple trees are larger than ideal and you can tell that they have witnessed a lot of history but they still produce apples.  This weekend the Gravensteins were ready to be picked. Gravensteins are a tasty eating apple, but they aren’t any good for pies. With a bumper crop, they needed to be used and what better solution than apple butter.

Choose a day when you can be home all day to make apple butter: It takes a long time to cook! Mine cooked all day – a good 12 hours in total but I think that that was largely due to the volume I made which necessitated starting it on the cooktop and then shifting it to the oven. It needs to be stirred regularly, but other than the stirring it requires little attention. If I was making a smaller batch, I would simply use the oven or a crock pot – it is so much less effort and requires so much less attention!

I can’t give you a specific recipe for apple butter – it depends on what type(s) of apples you have and how many of them you have.  The good news, however, is that you really don’t need a recipe.

I peeled, sliced  and cored my apples using a peeling and coring gizmo like this.  It yields a spiral sliced apple that I then cut into quarters.  If you have a food mill, you can slice your apples whole with peel and then run the cooked mixture through the mill, but I find beginning with prepared apples easier.

I filled a heavy bottomed 17 litre stock pot to within 2 inches of the top with the apples and added 2 litres of some soft apple cider from a previous year’s bounty that we keep frozen until needed. You could also simply start with a little water or commercial apple juice. I put the pot on low on the cooktop and began to let it cook. The fruit broke down into an applesauce quite quickly.  Gravensteins do break down easily but if you have an apple that doesn’t, you can easily break it down with an immersion blender or with a food mill.

I added spices to taste: my choices were cardamom, cinnamon, cloves and some ground ginger.  For my first batch, I used whole spices tied up in cheese cloth and then supplemented with ground spices.  For the second batch, I went straight to the ground spices. Remember that the apples are going to be reduced by at least half, so the spices you add will concentrate.  You can always add more spices later in the process if you find that you would like more.

As the fruit cooked down, I tasted it for sweetness and added brown sugar to my taste. Again, it is important to remember that the apples will reduce, so be careful not to over sweeten.

When my mixture had reduced by about half, I put it into two uncovered dutch ovens which I placed in a 250 degree F oven.  I continued to cook down the mixture, but in the oven it only needed to be stirred hourly.

The apple butter is done when it is very thick. You can almost slice the mixture and it will retain the “cut”.  By the time it reaches this consistency it is a lovely rich reddish brown colour.

I poured the hot mixture into hot canning jars, filling them to within a quarter inch of the top. I then quickly placed the lids on top.  All of the jars sealed without the need for an additional canning process.

My son loves this on pancakes, but I use it liberally on anything and everything that lends itself well to jam.

So this is a cheat post…but a good one nonetheless.  As some of you will know, I consider Saltspring Island, BC home even though I don’t currently live there.  Now there are a million wonderful things about this bizarre little gulf island, but one of my favourites is the goat cheese from Salt Spring Island Cheese Company.

Having recently accepted that I am lactose-intollerant (I discovered this quite a while prior to admission), my love of chèvre has become a need.  I should mention that I am fortunate that goat milk works for me, as it doesn’t for everyone.

Salt Spring Island Cheese Company makes a wide variety of goat’s milk products from feta to ice cream (the vanilla and chocolate are my personal picks), and carry all sorts of lovely olives and preserves.  If you ever get the chance, it’s a wonderful place to visit as they have the farm set up so that you can see the animals, watch the process, and indulge in goat cheese heaven on their beautiful patio outside the shop.  If you can’t make it to Saltspring, your loss! But you can still buy many of their products at local grocers across the country.

The photo below is of their relatively new product “Ruckles” pictured with Lesley Stowe’s Original Raincoast Crisps.

So, as there is no recipe needed to enjoy this post, I hope you get the chance to try the cheese for yourself!

This dip is simple and divine…but (warning) not particularly healthy.  It got passed onto me by my mum who got it from one of her best friends, Joanne.  Of course it pairs perfectly with crackers or tortilla chips and is always a party hit!

Many thanks to the brilliant Peter of Joshua Lawrence Photography for the camera tutorial.  Hopefully my pictures will now better reflect the appetizing recipes I post.

Chop the artichoke hearts and finely chop the garlic.  Mix all ingredients together and bake in a shallow pan at 350F for 20 minutes.  Broil for another 2 minutes to get a nice brown colour on top.