This recipe is one I came across on Pinterest from the blog, Let’s Dish.  It sounded simple and delicious so even though my son can’t take anything with nuts to daycare, I decided to try it as an at-home snack.  I’m sure the neighbours won’t mind helping if it turns out too much for the two of us.  Hope you enjoy them too!

In a medium bowl, mix together the melted butter, graham cracker crumbs, confectioners’ sugar, and 1 cup peanut butter until well blended. Press evenly into the bottom of an ungreased 9×13 inch pan. In a metal bowl over simmering water (to create a double boiler), or in the microwave, melt the chocolate chips with the remaining 4 tablespoons of peanut butter, stirring occasionally until smooth. Spread over the peanut butter layer. Refrigerate for at least one hour before cutting into squares. 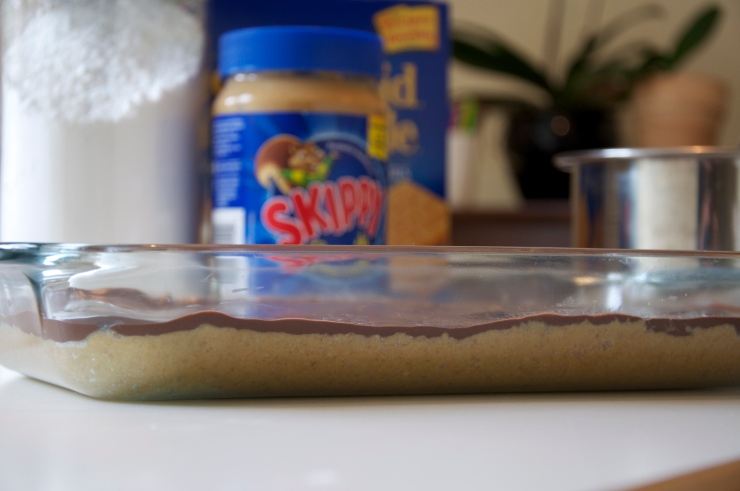 Anona and her husband, Tak, are old friends of my parents and every time we get to see them it is a real treat. Their property is magnificent and about 5 years back when we last visited, we sat out on the deck overlooking the pond and the weeping willow I’ve always loved, shucking oysters for dinner to be followed by lemon pie as the adults drank Dark and Stormy’s.  At the time I was so taken with the pie that we took the recipe back to Saltspring with us.  I believe my mom made the recipe once since, so it is time to give it another go I figure.

Incase you love art, as I was raised to do, here is a link to an article on Tak’s amazing work, Takao Tanabe’s love affair with landscapes, to give you a better feel of just how much beauty surrounds my memory of this lemon pie.

1/4 c. margarine (you can use butter but it heavily influences the flavour)

Combine sugar, cornstarch, grated lemon peel, lemon juice, and milk in a saucepan over medium heat. Bring slowly to a boil, stirring constantly with a whisk.

Add butter and cook until thick and smooth. Set aside to cool.

When cool, stir in sour cream and pour into a baked pie shell. Refrigerate until ready to serve, uncovered at first and then covering once chilled (to avoid condensation).

This dish is one I came across on one of my favourite blogs, The Traveler’s Lunchbox, in which this is described as a Tunisian Eggplant Frittata.  The recipe is originally from Kitty Morse’s North Africa: The Vegetarian Table.

Now I do not love eggs, I think they’re great for baking with, but when it comes to breakfast, no matter how they are served, I simply cannot have them so I also don’t eat quiches or frittatas…ever.  But I love eggplant (ever since I was old enough to contemplate that eggplant was entirely unrelated to egg – as a child my parents could only convince me to eat it if it was called Aubergine), so here we are with this Makhouda D’Aubergine in my terrible little electric oven and I am excited! I’ve made a couple changes due to lack/want of ingredients.  This dish is suggested as a side to tagines, but I intend to call it a meal given the effort that went into making it. Verdict is it’s delicious, eggs and all.

Peel and cut the eggplant into 1/2-inch dice. Sprinkle generously with salt and place the cubes in a colander to drain for about 20 minutes. Rinse and pat dry with paper towels.

Preheat the oven to 400F/200C. In a large skillet over medium heat, heat the olive oil and cook the eggplant, onion, and pepper, stirring occasionally until golden and soft, about 20-25 minutes. Transfer this mixture to a colander to drain off as much of the oil as possible.

In a medium bowl, mix the eggs and add the herbs, garlic, cheese and bread crumbs. Add the eggplant mixture. Season with the bharat, salt, and a small spoonful of the optional harissa or cayenne pepper, (and the serrano if you want the extra heat).

Grease a 2-quart soufflé dish (I don’t own one and used glass cookware instead). Pour the egg mixture into the dish and bake in the middle of the oven until golden brown and puffed in the center, 40-45 minutes (a knife inserted into the center should come out clean). Let cool for 10 minutes before unmolding onto a serving platter (you can also just leave it in the dish). Cut into wedges or squares to serve. Serve hot or at room temperature with lemon wedges on the side. 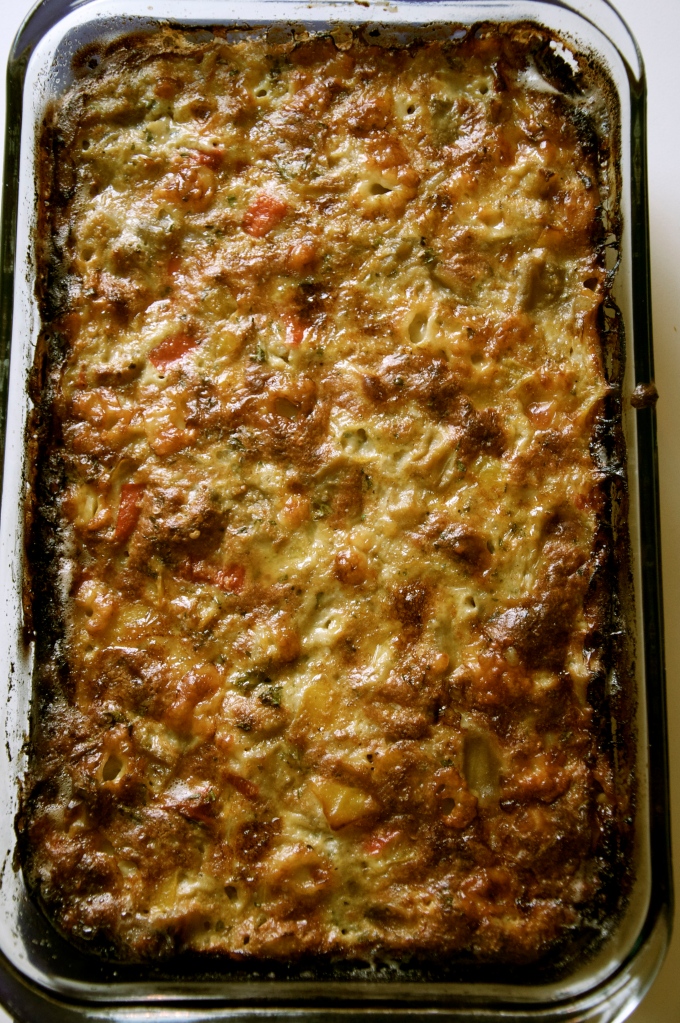 This dish was my favourite way of eating veggies as a picky little girl.  It’s simple, quick to prepare, and a tasty side to anything you toss on the BBQ.

Place the slices of cucumber in a dish or bowl.  Mix together the soy sauce, sugar, and vinegar and pour over.  Use a fork to gently ensure that the cucumber slices are coated and refrigerate for 3 hours, occasionally re-coated slices in their marinade as the ones near the bottom will absorb the most. Serve cold as a side garnished with sesame seeds.

Preparation time: approx. 15 minutes (if you are a slow cutter like me)

Note: you can replace the white sugar with brown if you need to and although I haven’t tried it myself, I imagine this would work with Tamari or Bragg’s for a gluten free version.

So I tried to think of what to make for my first recipe post.  I failed.  One friend suggested posting my favourite recipe, another suggested something I’d never tried.  Either way, I haven’t cooked since (unless frozen pizza counts).

A food/recipe blog is a commitment right? So here’s how I’ll proceed: wedding style.

Something old: you’re getting a family recipe and its gonna be simple.  Soy Sauce  Marinated Cucumber Salad.

Something new: a dish from one of my favourite blogs featuring my beloved eggplant. Makhouda D’Aubergine (recipe from The Traveler’s Lunchbox)

Something borrowed: Anona’s Sour Cream Lemon Pie from a wonderful family friend who my parents and I adore.

Something blue: thoughts were blueberries (too obvious), bluefin tuna (too expensive), blue (as in RARE because I don’t have the heart to ruin good meat) beef tenderloin (too good to not).  So Thai Beef Salad with Peanut-Cilantro Dressing it is, another family favourite.

So I’d like to begin with an apology for the headline photo – I realize it’s glaring and I will replace it as soon as I have something better. Promise.

Now, I’m not the best cook, photographer, or writer, but I can assure you I LOVE food.  My hope for this humble attempt at a blog is to share recipes of some of the food I love. Many of these are family recipes which have been passed down, some are new efforts from other food bloggers, and others are from my friends who have kindly shared them with me.

My posts will likely be sporadic due to my hectic schedule so I will try to make them worthwhile.

Time to hit the grocery store and work on a first posting!